The terms bandwidth and data rates are often used interchangeably, but they are in fact very different if you work in the cabling world.

Your internet provider may advertise a bandwidth of 500 megabits per second (Mbps).  In that case, they actually mean data rate.  In the cabling world, bandwidth is a property of the cable – its ability to transmit a signal that’s intelligible at the far end.

Any signal put on a copper or fiber link will degrade as it gets to the far end.  This is a result of simple loss, but also more complex factors such as return loss (reflections), and in the case of copper, crosstalk.  Vendors design their copper and fiber cabling to be able to deliver these raw signals (bandwidth) at higher rates.

So why is category cable bandwidth defined as MHz? Good question. Megahertz is the frequency or rate at which a wave will cycle each second, with 1 hertz equal to 1 cycle per second and 1 MHz equal to 1 million cycles per second. The relationship of speed to frequency is a bit complex, but in simple terms, higher frequencies are needed to carry more bits of data. Each data bit is encoded on a carrier frequency, and the amount of data that can be transmitted per second depends on the signal encoding scheme of the active equipment.

Back in the days of Cat 5, the bandwidth and the data rates were the same – 100 MHz cabling could deliver 100 Mb/s.  But designers of network interfaces have been able to develop encoding schemes such as pulse amplitude modulation (PAM) and DSQ128 to go beyond the simple 1:1 relationship of bandwidth to data rate.  By the time Cat 6 came out, they were able to drive 10 Gbps over a cable with a bandwidth of 250 MHz.  This approach is how NBASE-T is able to get 2.5 and even 5 Gbps out of Cat 5e cable and how your cable provider gets you faster internet speeds without recabling the connection to your house.

See the chart below for supported network speeds on different category cables. 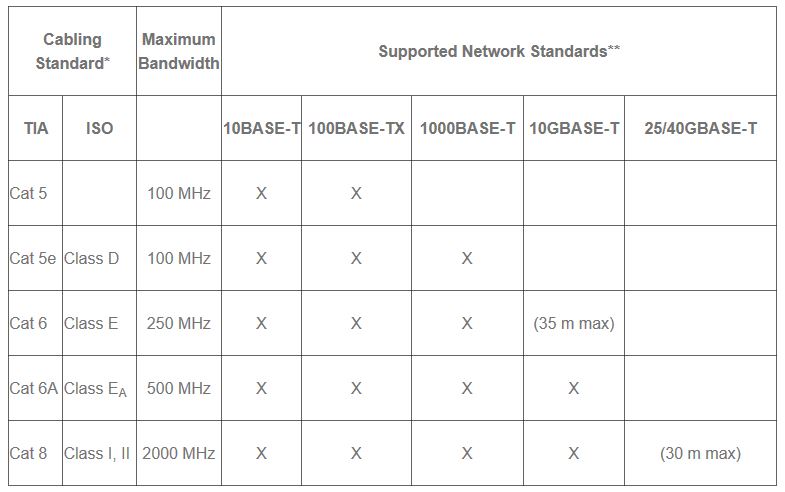 7 Reasons to Certify Your Network
Scroll to top